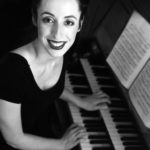 Pamina has been playing classical piano since age 6.  She trained at the Australian Institute of Music, studying with some of Russia’s greatly acclaimed pianists. She then moved to Brisbane aged eleven and continued her studies with Head Of Piano at the QLD Conservatorium of Music, Natasha Vlassenko. Here she achieved a Distinction in her Grade 8 exam and came 2nd Place in the QLD State Piano Competition.

Upon moving back to Sydney aged seventeen, Pamina began studying classical organ with Music Director of All Saints Anglican Church, Jassen Rose. Six months later she became organist in residence at two churches in the Sydney CBD where she continues to accompany the congregations with spiritual and secular music. She has also worked as a relief organist in churches throughout Sydney and as a piano teacher, Pamina has accompanied students in preparation for their AMEB exams.